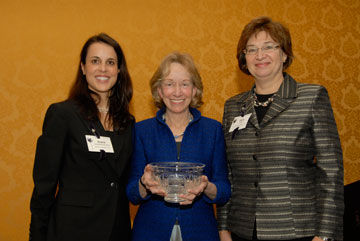 Philadelphia, PA (Nov. 9, 2007) - Historian, Author and NBC News Analyst Doris Kearns Goodwin graciously accepted White and Williams' Virginia Barton Wallace Award at an elegant breakfast hosted at the Ritz-Carlton in Philadelphia on Nov. 8, 2007. Goodwin most recently released her decade-long project, "Team of Rivals: The Political Genius of Abraham Lincoln," to critical acclaim. She was on hand for a book signing after the event.

White and Williams LLP established the Virginia Barton Wallace award last year to honor the firm's first female partner, known to her friends and colleagues as "Ginny." Ginny, who retired from White and Williams in 1980, continued to consult for the firm until she was in her 90s. Sadly she passed away in 2002, and the award named for her honors her memory and her contribution to women in law. The Virginia Barton Wallace Award includes a $10,000 check to be presented to a charity of the recipient's choosing. 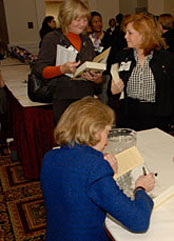 White and Williams selected Goodwin as this year's award recipient not only for her outstanding achievements and prominence in her field, but also because Goodwin recognizes the roles that women in politics have played in shaping American history.

"Ginny Wallace was a true pioneer among female attorneys," recalled Gale White, a commercial litigation partner at White and Williams. Ginny received her undergraduate degree from Wellesley College before earning the rank of 1st Lieutenant while serving with the Women's Army Air Corps during World War II. She thereafter studied law at the University of Pennsylvania, graduating in 1950. In 1961, Ginny became White and Williams' first female partner.

Goodwin is a Phi Beta Kappa graduate of Colby College and holds a Ph.D. in Government from Harvard University. She worked as an assistant to President Lyndon Johnson during his last year in the White House and later helped him prepare his memoirs. She launched her career as an author with the 1976 publication of New York Times bestseller "Lyndon Johnson and The American Dream." Goodwin has since written several additional historical works including "No Ordinary Time: Franklin and Eleanor Roosevelt: The Home Front in World War II," which earned the Pulitzer Prize in history in April 1995. 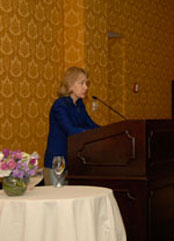 Described by one reviewer as "A brilliantly conceived and well-written tour de force of a historical narrative," "Team of Rivals" is a New York Times bestseller and was awarded the prestigious Lincoln Prize as well as the inaugural Book Prize for American History. Steven Spielberg has acquired the rights to "Team of Rivals" and is in the process of developing a feature film based on the book. Liam Neeson is slated to star as Lincoln.

In addition to handling her duties as a news analyst and authoring articles on politics and baseball - another passion - Goodwin is at work on her next historical offering, which will feature Theodore Roosevelt and the Progressive Era.

Goodwin's selected nonprofit, Friends of Dicisco, was founded with the goal of connecting people to their communities by cultivating a greater understanding of the relationships between humans and the natural world. The Massachusetts-based charity hosts a variety of educational community events. 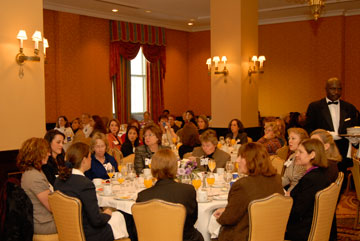 White and Williams attorneys are proud of the century-old heritage of excellence, innovation and integrity left to them by their predecessors. Every day, they dedicate themselves to maintaining their reputation, case by case, client by client. Their focus remains on their clients, whose goals and objectives they strive to understand and serve.