Robots are everywhere – but perhaps just not how everyone imagined them. For decades, the promise of robots brought to mind devices like R2D2 and C3PO, or perhaps Rosie the Robot from The Jetsons – autonomous, intelligent devices entirely safe for human interaction. Today, instead, robotic devices are becoming ubiquitous; augmenting human effort and intelligence in the military, industrial plants, healthcare facilities, retail stores and in homes.

Robotic devices perform repetitive and intricate tasks with greater safety, efficiency, precision and accuracy than ever before. While many of yesteryear’s robots had to be segregated from nearby people, vast technologic improvements such as sensors, cameras, operator communications, visual displays and artificial intelligence have made robots more collaborative and interactive, able to work harmoniously amidst both trained workers and untrained customers alike. The close proximity of robotic devices to nearby people suggests that robotic designers should focus on a feature that may substantially reduce the risk of injury: warnings.

In healthcare, robots sanitize, clean, assist with physical therapy, and even deliver patient meals. In the operating room, robots are even more prominent. Robotic-assisted surgical systems must undergo a meticulous development and approval process overseen by the Food and Drug Administration’s (FDA) Center for Devices and Radiologic Health, Division of Surgical Devices. Intuitive Surgical’s daVinci system was the first, and for a long time, the only general surgery robot-assisted surgery system, but other companies’ systems are entering the market. Asensus Surgical’s Senhance system was upgraded to include an AI-based Intelligent Surgical Unit in 2020. Stryker’s Mako system is a major tool in orthopedics. Siemens Healthineers’ CorPath GRX system has been approved for particular coronary and vascular procedures. Medtronic and Johnson & Johnson are both in the developmental homestretch for FDA approval of new robotic systems. CMR Surgical’s Versius system is under review by the FDA even as it is already in use in the UK, Europe and India.

“Warnings”: The Intersection of Robotics and Product Liability Law

A risk of harm exists wherever humans and robotic devices interact. Even with the best designs, programming and artificial intelligence cannot prevent all accidents. Robotic designers and makers must consider not only the robot, but how humans interact with robots.

When designing robotic devices, the law requires warnings to decrease the risk of harm that can’t be eliminated through design. Although product liability law varies across states, manufacturers can develop uniform warnings to minimize the risk of injury and the probability of liability litigation. The tort system can be a stormy sea, but following general guidelines can help pull entrepreneurs, engineers, designers and risk management professionals into safe harbors.

Generally speaking, manufacturers and distributors are responsible for compensating those who are harmed by a product adjudicated to be “unsafe” because it lacked proper design or sufficient warnings. Good warnings can ameliorate that risk by helping to change human behavior to reduce the likelihood of accidents. The greater the danger, the greater the need for attention-grabbing warnings.

The Scope of Warnings

A robotic manufacturer must warn of all “reasonably foreseeable” risks of injury or death presented by the product. That said, the assessment of the risks against which a device maker must warn requires a combination of engineering, ergonomic, legal, and sometimes, specialized safety backgrounds. Warnings may be the only means by which to make safe the myriad of consumer and industrial robotic and non-robotic products that present inherent risks of injury. Warnings must be tailored to the specific risk or to the specific product usage that presents the risk of injury.

Robotic devices present particular “warnings” challenges because of the wide range of potential harm that can occur with automated machinery – even machinery with abundant protections and artificial intelligence. A robotic company may need to warn about risks including those associated with both proper and even reasonably foreseeable improper usage of the robot. In some contexts, robotic manufacturers go so far as to warn of potential consequences associated with the robot in the event of power outages and natural disasters.

Who to Warn: Users and Owners

Product warnings must reach the product’s user. Going further, where the robot’s purchaser or owner may differ from the actual user – even a sophisticated user – the robot maker may be well advised to extend its issuance of warnings to both the owner and user. In healthcare, for example, the State of Washington’s Supreme Court ruled that the maker of a robotic-surgical system had to communicate all necessary warnings not only to the operating surgeon using the robotic system, but also to the hospital which owned the robotic system and allowed the surgeon to use it. Reversing a defense verdict in favor of the robot-manufacturer and against an allegedly injured prostatectomy patient, the Washington Court held the robotic-assisted device maker had to provide the hospital all of the product warnings in order to design a process of issuing credentials for surgeons to use the robotic system.[1] To date, Washington’s warnings requirement stands alone, perhaps in part because of the dubious causal nexus between hospital credentialing and harm to patients, but some robotic manufacturers in the healthcare space are preemptively issuing warnings to both users and owners.

Considerable research informs all aspects of the warnings that robotic manufacturers may need to issue to fulfill the duty to warn. Industrial and/or governing bodies may also inform “what” must be said, and “how” it must be said. For example, the non-profit American National Standards Institute (ANSI) has issued standards for such details as the color, size, font, symbolism and content of warnings. 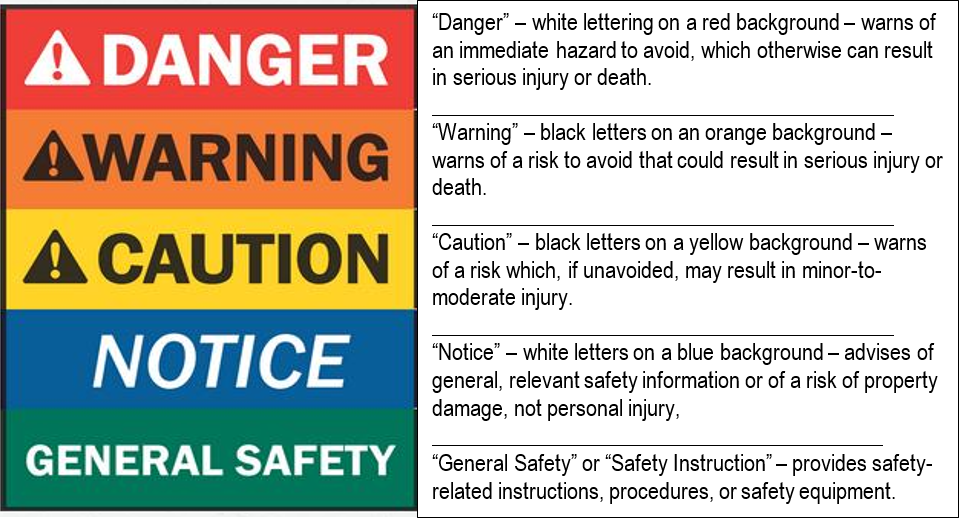 Other professional and industrial societies issue periodic guidance and pronouncements about what must be warned and how the warnings should be issued.

Whether military, industrial or consumer-oriented, the complexity of robotic operation also informs the nature and manner of necessary warnings. Some robot makers require users to undergo detailed safety training – complete with acknowledgements by the user about the potential for harm – either in live classrooms or via internet before the robot can be activated for use by that particular user.

For any given robotic system, machinery, product or device, there is considerable variance about “who” must be warned about “what,” “how” the warnings should be issued, and “what evidence” the company should develop and maintain to be able to defend the appropriateness of its warnings-decisions. The guidance of experienced product liability counsel and outside safety consultants will help reduce the safety and liability issues that otherwise pose underappreciated risks to both users and the manufacturer.

This correspondence should not be construed as legal advice or legal opinion on any specific facts or circumstances. The contents are intended for general informational purposes only, and you are urged to consult a lawyer concerning your own situation and legal questions.
Back to Page